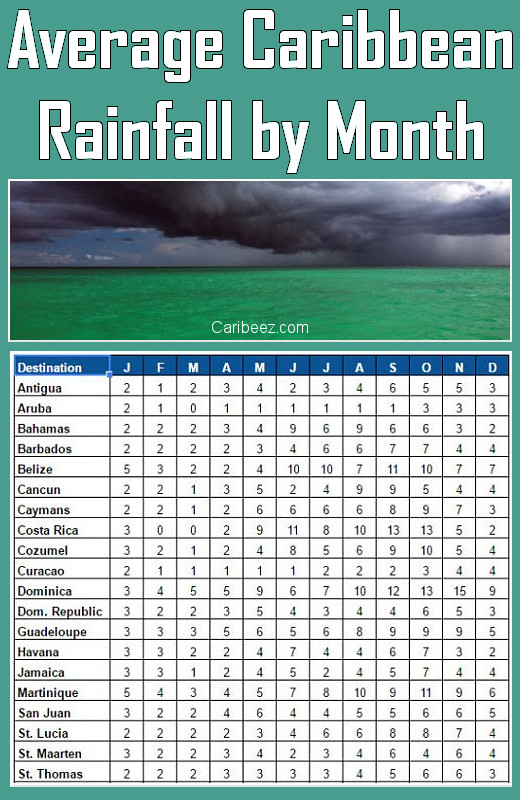 Caribbean weather in January is certainly warmer than the U.S., Canada, or Europe, but some places are warmer than others. The warmest destinations include Cayman Islands and St. Lucia; the coolest include the Bahamas, Dominican Republic, and Turks and Caicos. Rain averages about two to three inches per month. Keep in mind that sea temperatures is often cool for swimming in northern locations.

Temperatures in February show little movement. In some places they increase a degree while in others they decline. In Dominica, rainfall increases to four inches. Costa Rica reaches a low point for rain, which is good news for western Caribbean cruises.

March is one of the most popular months for visiting the Caribbean, not just because of spring break, but because of warming temperatures and low rainfall for many destinations. In Dominica, rainfall climbs again to five inches, but keep in mind that Dominica is a lush island with waterfalls and tropical rainforests. It’s a great place for ecotourism, though not so much for lying on a beach. Costa Rica continues to have low rainfall.

April is another great month to visit the Caribbean, for the same reasons as March, but with some exceptions. In San Juan, Puerto Rico, rainfall reaches its first high point of the year at six inches. It’s not the best time for a long-term stay, but it’s okay for cruise visitors, who can visit indoors San Juan historical sites and shopping.

Caribbean weather in May includes a brief rainy season for many destinations. Aruba is a safe bet because it is the driest island of all. Rainfall at Cancun, Cayman Islands, Costa Rica, and Dominica jumps to five inches or more per month.

This is a bad month for the Bahamas, with an average of nine inches of rain. Cozumel gets eight inches, while Belize and Costa Rica average more than 10. For people who like hot weather, Cancun, Cayman Islands, and Cozumel have average high temperatures that reach 90 degrees Fahrenheit.

June is the official beginning of the annual Caribbean hurricane season. But historically it almost no hurricanes and only one tropical storm every other year, according to the U.S. National Hurricane Center.

Hurricane season is starting to make itself known, with six inches or more of rainfall for the Bahamas, Barbados, the Cayman Islands, and St. Lucia. It’s a good month for Antigua, Cancun, the Dominican Republic, Jamaica, and the U.S. Virgin Islands. July averages three tropical storms with two that become hurricanes.

“Ugh” is a good word to describe rainfall for the Bahamas and Cancun. Every major destination except for the ABC islands of Aruba, Bonaire, and Curaçao averages four inches or more. On average, August has three tropical storms with two that become hurricanes.

October is barely better than September, usually the second worst month of the year for Caribbean weather. All of the major destinations average five inches or more of rain. On average, four tropical storms develop, but they rarely grow into hurricanes.

The Bahamas finally get a break from the rain and wind, but the temperatures are starting to drop too. Barbados, Cancun, and Jamaica are becoming better options. St. Maarten has the heaviest rain of the year. On average, only one tropical storm forms every other year. Hurricanes are rare.

The hurricane season is officially over and rainfall declines everywhere. But temperatures are declining as well; the Bahamas, Cancun, and other northern destinations are usually too chilly for swimming. Dominican Republic and St. Thomas are worthy options. Tourist activity starts to increase in the Caribbean as northerners start to flee cold winter weather.