When is the Best Time to Visit Cancun?

December to April are the best times for visiting Cancun, offering the perfect mix of sunny skies and little rain. April and December offer the best weather, while May is best for wildlife (whale sharks have arrived and sea turtles are nesting), and November is the least crowded and best-priced (though can be rainy some years). Thanksgiving, Christmas, and Holy Week are the busiest time for Mexican family vacations. 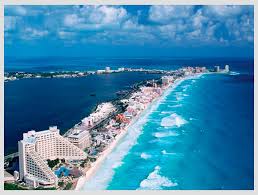 Cancun Weather in January: January in Cancun is warm, sunny, and dry, with daily highs around 28°C – dropping down to a cooler, comfortable 20°C at night. Cancun is located on the edge of a tropical jungle, so humidity is always present, but January is the least muggy time of the year, especially toward the end of the month. This is a great month to get out and explore the ruins and jungle inland, as well as visiting Downtown Cancun and the beach. Rain showers come occasionally, but they are typically very light and brief, lasting only an hour or two. Ocean temperatures are cooler than other times of the year but are still comfortable for swimming. Visibility is excellent for snorkeling or diving. (Average Max Temperature: 28°C, Average Rainfall: 46mm, Days with Rain: 7, Ocean Temperature: 27°C.)